Learn About our Team & Culture. 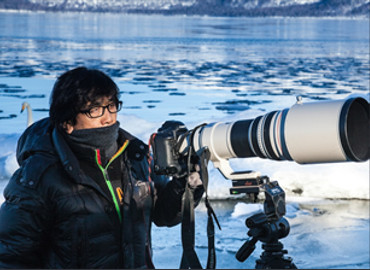 Kishimoto was born in Saroma Town, where Lake Saroma is located in Abashiri Quasi-National Park, and has lived in Sapporo since age 15. He created his own business after working for a major printing firm and at the photography department of an advertising agency.
Today, he is the representative of Sapporo Commercial Photo Studio Co., Ltd., a regular member of the Japan Advertising Photographers’ Association (APA), and a member of the Japan Society for Arts and History of Photography.
He has shot a variety of photos, including model photos for advertisements and magazines,nature photos and aerial shots. He has also worked on fashion shoots overseas, including the United States and Europe, for such media as apparel company pamphlets and posters.
He has been fascinated by the beauty of nature since he first engaged in professional landscape photography in 2006, after a request from a major Japanese manufacturer for visually appealing nature shots, and has since been shifting his focus from years of studio work to outdoor work. 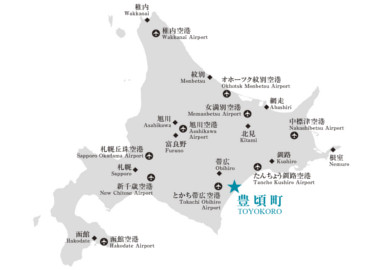 Toyokoro,a town in Tokachi in eastern Hokkaido,is where local land reclamation began during the pioneering days of Hokkaido and where the Tokachi River ends–a river that originates in the Taisetsu Mountain Range and runs through the vast Tokachi Plain. Many of our forebears aspiring to develop the land of Tokachi settled in areas along the river from Toyokoro’s Otsu district to inland areas, laying the foundations for the region’s economic and cultural development today.
Playing a key role in the development of Toyokoro was Takachika Ninomiya,a grandson of Japanese agrarian reformer Sontoku (Kinjiro) Ninomiya. Takachika fostered the development of independent-minded farmers based on his grandfather’s moral and economic teachings, instead of promoting tenant faming under the then-prevailing practice of large-scale land ownership. The teachings remain a source of pride for local residents today and are still alive in the Citizens’ Charter.
Toyokoro has a continental climate with warm seasonal winds blowing from the Pacific Ocean in summer and cold seasonal winds from the Siberian continent in winter. The town has relatively little snow cover and an abundance of sunny days—known as Tokachi-bare (sunny days typical of Tokachi)—from autumn to spring. The town’s appeal includes a year-round opportunity in the diverse natural environment to sight numerous wild animals, including five wild birds designated as natural monuments. The town, mainly the Otsu district, also boasts a vibrant fishing industry with set net fishing of chum salmon returning to the Tokachi River as well as the landing of shishamo smelt, whelks, surf clams and barfin flounders.
In this way, Toyokoro residents have long enjoyed lives built on the blessings of the Tokachi River. Recently, the stunning local scenery of “jewelry ice” has garnered increasing attention as a sight representative of Hokkaido. Jewelry ice, referring to lumps of crystal-clear ice, is a natural phenomenon which occurs when the ice on the Tokachi River breaks into chunks and floats off into the Pacific Ocean. The chunks of ice— the ice that turns into various shapes as it gets tossed about by ocean waves—are then washed up on the sandy beach and sparkle in the sunlight, making for a truly mesmerizing sight.
Come and see what Toyokoro has to offer in winter and enjoy a stunning sight that would literally take everybody’s breath away. 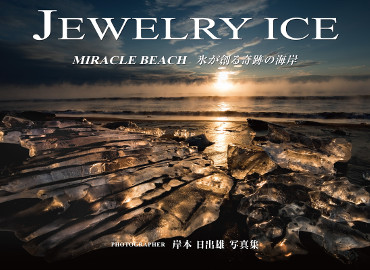 For details, please inquire from the "Scene Hokkaido" Web site or "contact-form"

How Is Jewelry Ice Formed?

Ice lumps known as jewelry ice appear every winter on Toyokoro Town’s Otsu Beach at the mouth of the Tokachi River in Hokkaido. Since the publication in 2016 of a newspaper article about them, they have garnered attention from people across Japan via the internet and other media. In fact, their beauty is such that they attract tourists not just from across Hokkaido, but also from outside Hokkaido and beyond Japan. The name “jewelry ice” was given to these ice lumps—gems that turn different colors in the sunlight—in around 2012 by Hisashi Urashima, a Toyokoro native, photographer and faculty member of the Otaru University of Commerce. The term “jewelry ice” may make some people feel like seeing it at least once in a lifetime. Considering jewelry ice as a valuable tourism resource, the Town of Toyokoro started online information services about the ice in 2015. The town office has been receiving more inquiries about it as it has drawn more attention. Yet the fundamental question of how jewelry ice is formed remains unanswered.
To find the answer to that question, researchers from the Kitami Institute of Technology teamed up with those from Fukuda Hydrologic Center to elucidate the natural phenomenon. They looked into the relationships connecting the past timing of jewelry ice formation and tide (sea) levels, conducted interviews and, in 2017, carried out field observation. Based on the study results, the researchers classified the mechanisms whereby jewelry ice forms and appears on Otsu Beach into the following four phenomena:

Ice formation on the Tokachi River due to decreased temperature


Breakage of ice into chunks due to tide level changes

To capture images of river ice the moment it breaks into chunks, the team installed time-lapsed cameras in the winter of 2017. Captured images showed that river ice breaks during spring flood tides—during the transition from low to high tides while the difference between high and low tides is large.

Carriage of chunks of ice out into the sea

Images captured by the cameras showed that chunks of ice float off into the sea during ebb tides—during the transition from high to low tides. The team also floated buoys on the river to see if they would wash up and accumulate on Otsu Beach. Focusing on wind directions, it was found that they were washed ashore by northerly winds.

The camera images showed that lumps of ice accumulate on the shore during spring flood tides—during the transition from low to high tides while the difference between high and low tides is large.


Based on these findings, a current answer to the question of how jewelry ice is formed is summed up as follows:
1) A temperature drop causes the river to freeze over during a neap tide, when the difference between high and low tides is small.
2) The river ice breaks into chunks during a spring flood tide.
3) The ice chunks float out into the sea during ebb tides—during the transition from high to low tides—and are brought close to Otsu Beach by northerly and easterly winds.
4) The ice chunks get washed up and accumulate on the shore during spring flood tides into what is known as jewelry ice.